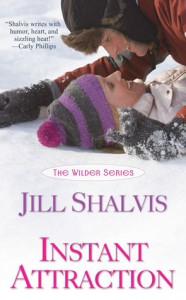 This will be short but the more I read, the more I was like 'WTF?'.  Things kept on pulling me out of the story so I just gave up.  Glasses fogging up every time heroine looks at the hero. Umm...yeah, that just doesn't happen.  Hero hiking up a mountain he planned to snowboard down.  Umm...the snow has to be pretty deep to snowboard down so I think it would be really difficult to hike especially with a bum knee.

What bugged me the most was how the hero crashing at a snowboarding event was treated.  The author treated it as if the best snowboarders never fall so when the hero did, the media made it seem like he was taking drugs or hungover.  You just have to watch the Olympics to know how wrong this is.  Snowboarders fall, even the best ones. It's inevitable. I wasn't even sure what event he actually fell on (I guess I didn't read far enough to find out) but I'm guessing the half pipe since some of his medals were from the winter x games. If that is the case, then the whole thing is stupid because snowboarders fall all the time on the half pipe especially when they are trying new tricks.

Anyways I couldn't get over this, so I put this in my DNF shelf.  The characters seemed okay but the book kept pushing on my 'that isn't realistic' button.  I expect my contemporary romances to be more realistic and this just wasn't.  From the girl who lived in Northen Utah and used to wear glasses.