Review: Let Me Be The One 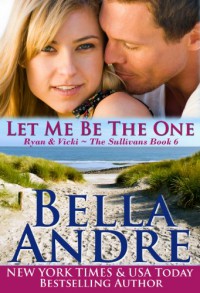 Well, I'm totally reading this series out of order.  I tried to read the first one but because it had insta-love, I couldn't finish it.  I'm not a real big fan of insta-love.

I decided to try some of the author's later works to see if it's worth going back and reading the first one.  In my opinion, it is though there is still insta-love in this one but both characters ignored it for 15 years to become best friends.

This book is about Ryan Sullivan, superstar pitcher, finally getting the girl he has loved for 15 years, Viki, the sculptor.  Viki moved to San Fran her sophomore year of high school at 15 years of age.  Viki is used to moving around because her dad is in the military and so she stopped making friends since she will be gone in a year or so.  She has a major crush on Ryan but thinks she is no good because jocks don't go out with artists. She sneaks peaks at him a lot, telling herself it is for her sculptor since she is doing it on laughter and he loves his laugh.

So one day, some crazy ass driver in the high school parking lot(I almost think all high school driver are crazy) almost runs Ryan over but Viki saves him.  After that moment, they become friends.

15 years later, Viki is back in San Fran, a year after she divorced her asshole of a sculptor husband in Italy.  She plans to start anew and is trying for a fellowship which is a competition for artists that will get her noticed.  One of the judges tricks her in being alone with him and has a plan to seduce her.   She panics and calls Ryan to rescue her.  Ryan, who is very protective of Viki, rushes over to save the day. He plays along with her plan that he is her boyfriend.  After the creepy judge leaves,  Ryan demands that Viki stay with him while she is living in San Fran.  She, with reluctance, agrees.

So the story begins of this kind back and forth relationship. Both Ryan and Viki are worried about ruining their friendship.  Viki doesn't really believe that Ryan would be with her since he had tons of girlfriends and he is a jock. Ryan is afraid of being rejected.  It was kind of sweet that he feared her rejection.

Finally, Ryan realized that he never wanted to live without Viki ever again and would do anything to keep her. He plans to use the whole fake boyfriend thing to his advantage.  Viki is skittish, especially after her bad marriage.  Actually, it did get a little annoying.  She would jump to false conclusions pretty quickly.  There was a lot of miscommunication.  But once they got it right, it was oh so right.  Plus, really hot sex.